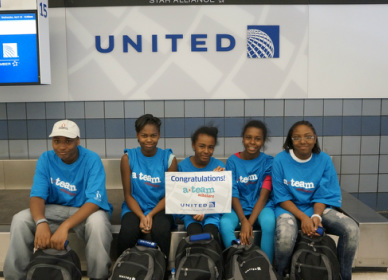 On Sunday, April 13, the students and their families arrived by limousine at O’Hare International Airport for their first-class treatment, which included expedited check in at the Global Services lobby. With support from the James R. Jordan Foundation, United Airlines, and the United Airlines Foundation, the families enjoyed a three-night stay at the Walt Disney World Resort along with passes to the theme park. The students earned the trip by maintaining straight-A's throughout all four core subjects in addition to fulfilling the rigorous requirements of the A-Team Scholars Program. They not only earn a vacation for themselves, but were allowed to bring their immediate family as well. The hard working students were accompanied by their families on an all expenses paid trip to Walt Disney World Resort in Orlando, Florida for 4 days and 3 nights, sponsored by United Airlines.
Visit United's Website
James R. Jordan Foundation